Sometime before I started writing in this blog about the contemporary dalit heroes. I could not carry forward the project owing to lack of contact and information. I was living abroad at that time. Nevertheless, I had been referring to the dalit talent and up-coming youngsters in my blog entries under various other heads and in the process wrote about Pawan Tinu, Hardev Kaur Shant, Madan Jalandhari, Sushil &Jaswinder Sheemar, Babita and Anupam Kler and more recently Sunil who has been selected in PCS recently.

My friend Malkiat Singh of Balan (famous for Sachkhand Dera Balan) provided me an inspiration to undertake the subject again by inviting me to the anniversary of his father on July 2 at Mai Bhaggo Gurudwara at Balan. The function was organized by the family trust – Munshi Ram Charitable Trust, started some years before by the family of Malkiat Singh. The purpose of the trust is to encourage and facilitate the students of the village and around by providing monetary assistance and also help to the needy poor for medical etc. It is an appreciable activity. The trust and its Chairman Malkiat Singh were kind enough to associate me with the function. I was asked to distribute the prizes and awards which was an honor for me. I am also grateful for an honor ( Saropa) conferred on me by the esteemed Mai Bhaggo Gurudwara on the occasion 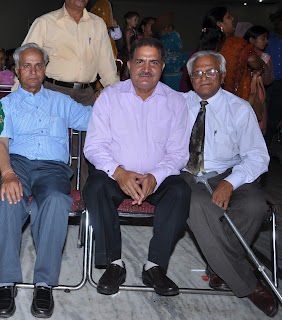 Coming to the subject of contemporary heroes, Let me start with Malkiat Singh himself. In fact he is the hero and the subject of my blog. Rising from an ordinary background in the village Balan, Malkiat scaled the heights of success and position in the establishment and society at large. After post graduating in political science from the DAV College in Jalandhar, Malkiat was selected to join the Indian Police Service (IPS) in 1977 and allotted UP cadre. It was a great success for an ordinary village boy. He deserved it fully. My recent interaction with his college day friends like Ram Lal, Sharat Sabharwal (currently High Commissioner of India to Pakistan) and also his alma mater Dr. K.C. Mahindru and Prof. K.K. Ghai indicated that Malkiat was not only a brilliant and dedicated student but also a fine man. Obviously, Malkiat rose in the hierarchy of the service he joined and adorned the coveted position of the Director General of Police in UP, the highest position in the IPS career. During his long career in the IPS, Malkiat held challenging positions and handled difficult situations. In the process, Malkiat earned due reputation and appreciation and also recognition in the social and governmental circles. The political establishment headed by Ms. Mayawati as the Chief Minister of UP rewarded, rightly so, Malkiat Singh with a coveted and constitutional position as the Chairman of the UP Public Service Commission, on his retirement from the IPS early in the year 2012. Malkiat Singh is heading the constitution body of the largest state of India, UP with distinction and élan.

I am proud of my friend Malkiat and wish him all success and further prosperity in the years to come. Malkiat is one of contemporary heroes of the community.

Posted by ramesh chander at 9:43 AM