India celebrates its 64th Independence Day today the August 15. President of India addressed the nation yesterday, on the eve of the National Day. Prime Minister of India spoke to the nation from the historic Red Fort in the morning of today. The Day is being observed with all solemnity and gaiety not only on India but through out the world. The message is getting clear that India has come a long way since Independence in August 1947 but still it has to go a long way to eradicate poverty and under development from the face of a large chunk of the masses. Democracy yes but equality is the hallmark of freedom. Independence will have no meaning for the socially suppressed and oppressed millions unless a caste less society is established.

We are celebrating the 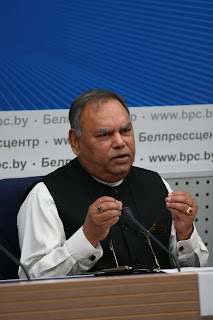 Independence Day in Minsk (Belarus) to in the evening. His Excellency the Minister of Industry of the Republic of Belarus is joining us as The Chief Guest. The local talent, young Belarusian girls regale the audience with the classical and Bollywood dance and music. I (Ambassador of India to Belarus) spoke to the Media at the National Press Centre in Minsk on the eve of the Independence Day to greet our Belarusian hosts and give the mood of the nation on the occasion of the Independence Day.

I greet and congratulate all my country men and friends of India on the Independence Day of India, August 15. Let me conclude with a poetic quote: