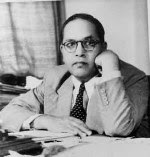 today is the birth anniversary of dr. b.r. ambedkar, father of the indian constitution, champion of the rights of the downtrodden, a great social reformer and intellectual of standing - a great son of india. dr. ambedkar's contribution to the contemporary india is enormous. he was an exponent of peoples democracy. india is, today, to realise his vision, the largest popular democracy in the world. ambedkar stood for the rights of the weaker sections of the society so that the dalits of india could afford to live an honourable life and belong to the main stream of the society, dr. ambedkar's agenda of social reform, though slow, is taking shape in india with the legal framework for the empowerment of woman, right to education etc. being brought in and set in motion. it is a matter of satisfaction.

it is also gratifying to note that, in spite of the initial unfounded bias on account of both ignorance and design, dr. ambedkar's role and solid contribution in preserving the unity of india, reforming the society, laying the foundation of a secular and progressive state is being increasingly recognised by the indian society at large. this is a befitting tribute to the memory of the worthy son of india. the real tribute to the memory of dr. ambedkar would be paid when a caste less society and a way of life which recognises the principles of liberty, equality and fraternity, as enshrined in the constitution, is established. dr ambedkar rightly said said that ' what we must do is, not to be content with mere political democracy, we must make our political democracy a social democracy as well.'

dr. ambedkar was an icon for the empowerment of the oppressed and depressed in india. today, april 14, we have with us in minsk (on an official visit), hon'ble chief justice of india k.g. balakrishnan, a living example of ambedkar's legacy. dr. ambedkar was father of the indian constitution and chief justice k.g balakrishnan is today the custodian and gurdian of the constitution. it is a full some tribute to dr. babasaheb ambedkar.
Posted by ramesh chander at 7:21 PM